Brac is the largest island in Dalmatia and highest in Croatia, most known for its beach called Zlatni rat, Golden horn, which is included on the list of the ten most beautiful beaches in the world. After we pick you up in Trogir or Split waterfront or on any other agreed place we are suggesting to start this tour by making a first stop in Milna for a short walk and morning coffee. Milna is a small untouched fisherman place on Brac Island situated at the end of a spacious bay. After Milna we will continue our tour towards Bol. On our way to Bol we will visit navy tunnels and take short swimm there.

Beach Zlatni rat is situated in town Bol, where you can do a short check of the center of Bol and then go to beach Zlatni rat which is located only 2 kilometers from the center. Zlatni rat has a triangular shape and its cape of the beach keeps changing its shape constantly due to the influence of winds, waves and sea currents, making it appear different and repeatedly interesting. Because of favourable winds, Bol’s beach is a favourite spot for surfers and kite-surfers from around the globe.

After Bol we are heading back home and during our way back we can stop on some nice beach to enjoy untouched nature of this Island.

Tour info
Bol and Brac tour is created for people who wants just to enjoy untouched nature and old Croatian heritage. You will visit Golden horn, one of the most popular beaches in the world. Also we will visit remains of Navy base, leftovers of past times.

Itinerary of private tour is flexible to suit your whishes and interests. As well as departure and arrival time, all to fit your personal schedule.
It is possible that itinerary need to be adjusted due the weather conditions or Captain decision

Beaches near Bol, swimming and snorkeling
5

There are no reviews yet.

Only logged in customers who have purchased this product may leave a review.

Hvar is one of the most beautiful
10 hours
Trogir and Split
€450.00
Price starting from

GET INSTANT OFFER FOR BRAC TOUR 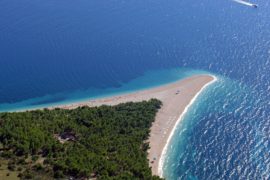 The Blue Cave Tour from Split